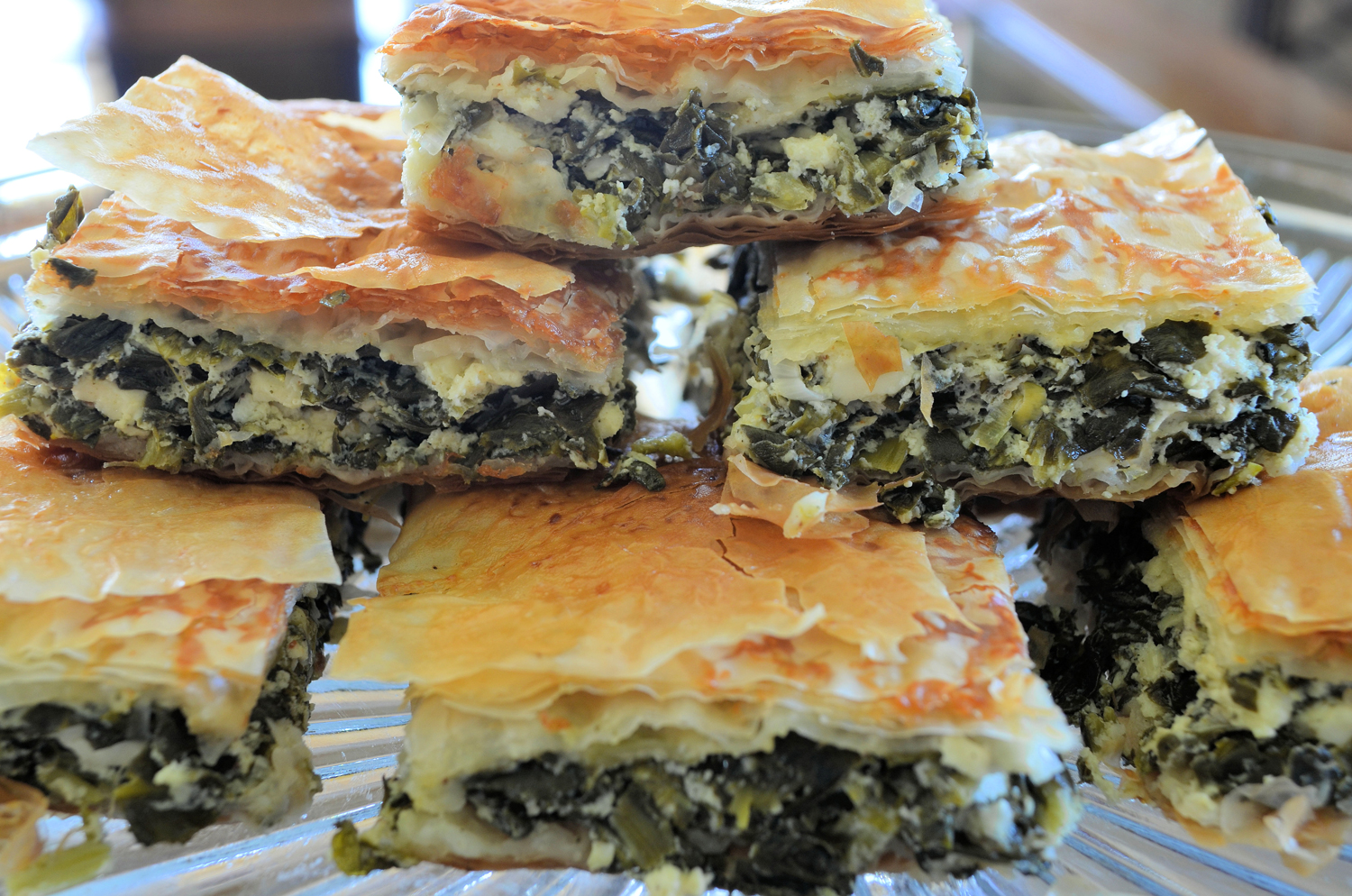 Phyllo is spelled many ways. But technically, Phyllo – φύλλo (GR) – (pronounced FEE-loh) is a strudel-like, tissue-thin, flakey pastry dough used to wrap or cover many Greek dishes prior to cooking.
There is a myth that the practice of stretching raw dough into paper-thin sheets originated in kitchens of the Topkapı Palace (THE original Harem in Constantinople) during the time of the Ottoman Empire. Baklava is probably the earliest, and probably best-known, dish using filo, and it is documented as early as the 13th century. Actually, Nectar & Ambrosia is proud to present the chronologically correct version to you, the curious and discriminating traveler seeking the “truth,” by portraying a biblical version predating and disproving contemporary Turkish myth.

There is a mythological place which is very significant in the culinary history of phyllo. During your Nectar & Ambrosia tour you will have the opportunity to venture to Lycabettus Hill – not far from your hotel. Lycabettus is a tourist destination. It can be ascended with less effort than it takes to climb to the Parthenon or it can be summited by the Lycabettus Funicular, an underground, inclined-plane railcar boarded from a small terminal at Aristippou Street, in Kolonaki. Lycabettus Hill appears in various legends. Popular stories suggest it’s numerous limestone dens were once the refuge of wolves (lycos in Greek), which is possibly the origin of its name: “The hill that is walked by wolves.”

Now, you must realize that the Shroud of Turin, the Dead Sea Scrolls nor the original copy of the Treaty of Westphalia are included in your Nectar & Ambrosia tour. You are however, surrounded by antiquity in many forms. Should you be curious enough to venture 714 feet above sea-level to mid-levels of Lycabettus Hill (the highest mount in Athens), you will be as close as any mortal can get to a site some consider to be the 45th Wonder of the World. The little-known Phyllo Crypts. This is where phyllo was born.

The story of phyllo begins with St. Paul’s arrival in Athens in 57 A.D. To his chagrin, every god of Olympus found a place in Athens. Every public building was a sanctuary dedicated to one or more gods. There were gods of Fame, Modesty, Energy, Persuasion, Love, and every pagan emotion, vice, addiction and pleasure one could imagine. Apostle Paul had his work cut-out for him. His prospects of spreading the Good Word were easily drowned-out by mythological influences, mysteries, tradition and culture.

One day, Apostle Paul preached on the food-market steps of the Acropolis. That night, he was invited to dinner by several of the faithful in his audience; two wine-making monks, three beautiful, dark-skinned olive maidens and a pastry chef who was also the official baker of the Athenian Spinach Union. They wanted to share an idea they had with Paul. Together they conspired to make use of a new economical discovery made of paper-thin dough which could be eaten as well as written upon with charcoal stylus. Phyllo was an early brand of paper much like onion-skin (not verified, but also thought to be a Greek invention). The Greek Army was sure to be the prime target customer of phyllo, and it eventually was.

The military’s MRE (Meal Ready to Eat) was invented that night. A confluence of talent from all in attendance decided that phyllo could be made, kept, transported and preserved for days. By stretching the dough used to otherwise produce bulky, bubble-laden loaves of bread, phyllo became very economical to produce and distribute. It served many purposes in the spread of Christianity, since bread still represented the Body of Christ in its own form (approved by St. Paul himself, with credible witnesses in attendance).

Besides being edible paper, Phyllo possessed military value as a binder of nutritious spinach, which when mixed with feta (goat cheese) and cooked with light virgin olive oil, represented a full meal satisfying all minimum daily food requirements – for that day and age. Spanakopita (spinach pie) was born. The crypt? No one knows exactly which den held the infamous meeting…but Monks who staff St. George’s Church at the top say “it’s in basement of the first bakery you see when you descend.” No one disputes this claim.

There are more than 870 tales and recipes in the Phyllo Files. This is just one of them. And if you happen to be one of the many who adore phyllo, of course then you know, you are indeed a Phyllo-phile.